In the aftermath of the devastating attack at the Manchester Arena on the 22nd May 2017, an amazing sense of unity and solidarity was shown all across the city and beyond. Central to this solidarity was a well known symbol of Manchester’s industrial heritage, one that has been an emblem for the city for over 175 years. Worker bees have been associated with the city since being incorporated into Manchester’s coat of arms in 1842. In the days following the attack, scores of people literally queued outside tattoo parlours to have the Manchester Bee inked on to their arms in a show of indomitable spirit. Bees were added to social media profiles, car bumpers and business windows.
In the summer of 2015, inspired by Manchester's burgeoning urban art, I created my own impression entitled Urban Bee.
The following article accompanied the artwork in June 2016.

From the grandest buildings, bridges and industrial heritage to humble lamposts, litter bins, planters and traffic bollards, the Manchester bee can be seen all around the city. The worker bee is a symbol of Manchester’s industrial heritage; testament to the ceaseless hard work and activity that made nineteenth-century Manchester a global trade and industrial giant.
The worker bee motif can be traced back to 1842 when a coat of arms was granted to the city. A classic heraldic design, it is full of symbolic information. A centre-piece shield is flanked by an antelope and a lion. The antelope, more of a mythical figure than true animal, stands for peace, harmony and courage whilst the lion is a classic symbol of bravery and strength. The shield itself is taken from the lords of Manchester, who ruled the city prior to 1301. A common belief is that the three diagonal stripes depicted on the shield represent the rivers which run through the city centre: the Irwell, the Irk and the Medlock. The image of a ship signifies trade and enterprise. The shield is crowned with a globe covered by a swarm of seven bees. The city's motto - ‘Concilio Et Labore’, shown on a scroll at across the bottom of the design, can be loosely translated to 'Wisdom and effort' or 'Through council and hard work' or even 'By working together let's achieve great things’. 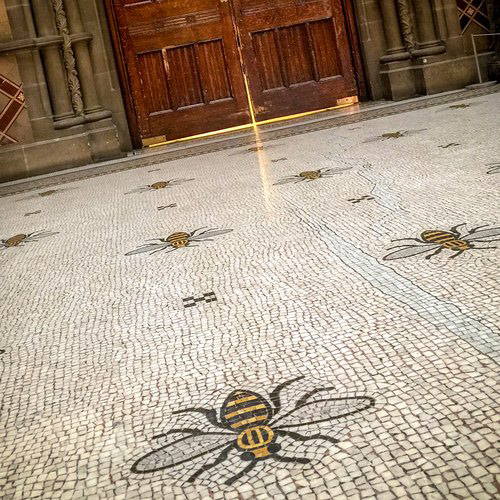 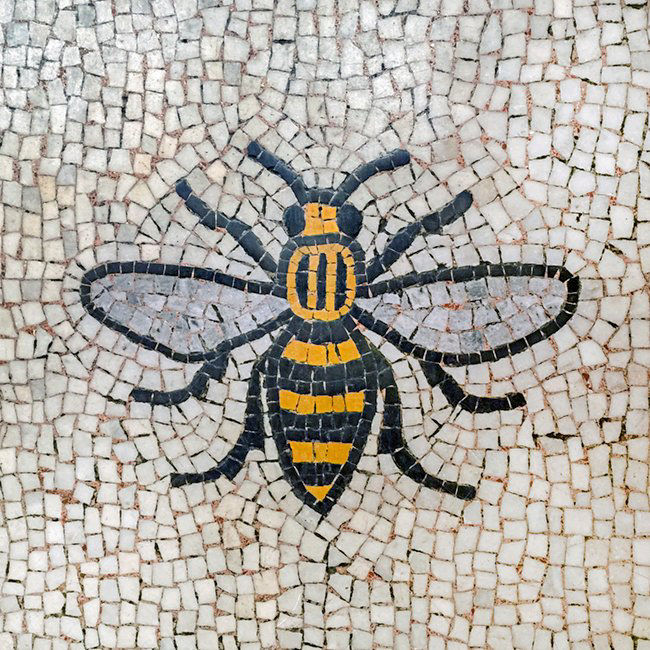 Within Manchester's magnificent Town Hall, designed by architect Alfred Waterhouse and completed in 1877, a beautiful bee mosaic-tiled floor (see above photos) adorns the landing at the entrance to the building's Great Hall. The bee symbol on the floor has provided the inspiration for the many of the subsequent bee designs that have appeared over the years.
The recently installed £3.5m glass passageway across Library Walk, linking Central Library to the town hall extension, has bee motifs on its glass panels. Also inside and outside of the town hall is the Cottongrass motif signifying the nineteenth century cotton trade when Manchester was given the nickname of Cottonopolis. Across the city at the intersection of Oxford Street and Whitworth Street stands the Refuge Building (*now the Kimpton Clock Tower Hotel). The clock tower of what was once the tallest building in the city has four clock faces and upon each clock face are bees in flight indicating the quarter hours , and closed wings bees for the other intervals. 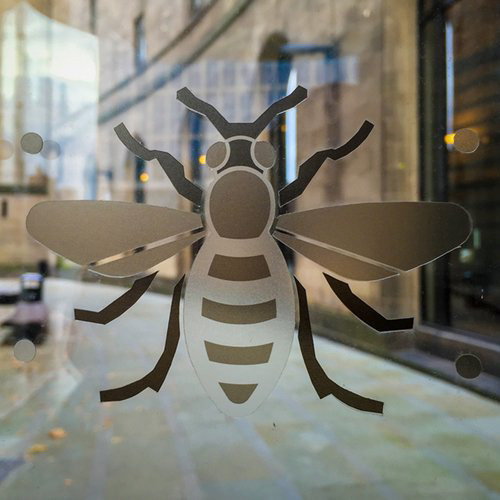 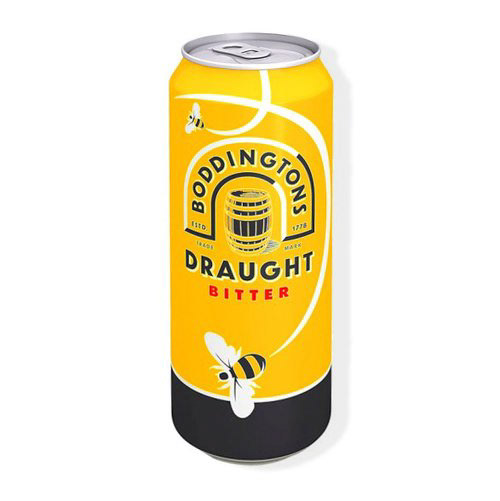 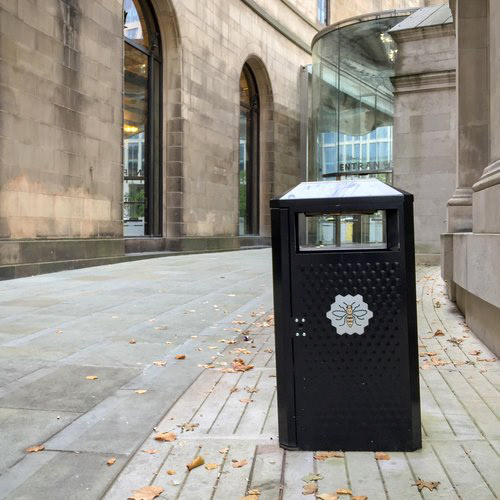 In modern day Manchester, the bees have broken out of the confines of the heraldic arms and have been incorporated into creative renderings of business logos and graffiti art. Boddingtons Brewery, best known for Boddingtons Bitter (Boddies), marketed as 'The Cream of Manchester' has a bee central in its logo. Upon a growing number of Manchester buildings, beehives are being created in rooftop gardens. Manchester Art Gallery sells its own honey aptly badged as 'Bee-Raphaelites Honey'. Take a stroll around the Northern Quarter and you’ll see a lot of bee-related art. There are individual statements of identity in the form of tattoos to display a love of the city. In a 2015 interview with the Manchester Evening News, Elbow's frontman Guy Garvey says “Me and my friend are both having the Manchester worker bee tattooed. It’s the only thing I would ever consider having tattooed on my body. I’ll probably get it on my calf.”
The worker bee has come a long way as a symbol for Manchester's culture and history and will continue to represent the city as a symbol of hard work and unity.

My vibrant, energetic art entitled 'Urban Bee' is inspired by Manchester's iconic symbol of the city's industrial heritage and its modern day urban art.
The artwork is my interpretation of the hope, courage, strength, pride and defiance that characterises the spirit of Mancunians through times of triumph and tribulation. These moods and emotions are conveyed through colour and abstract lines.
↑Back to Top